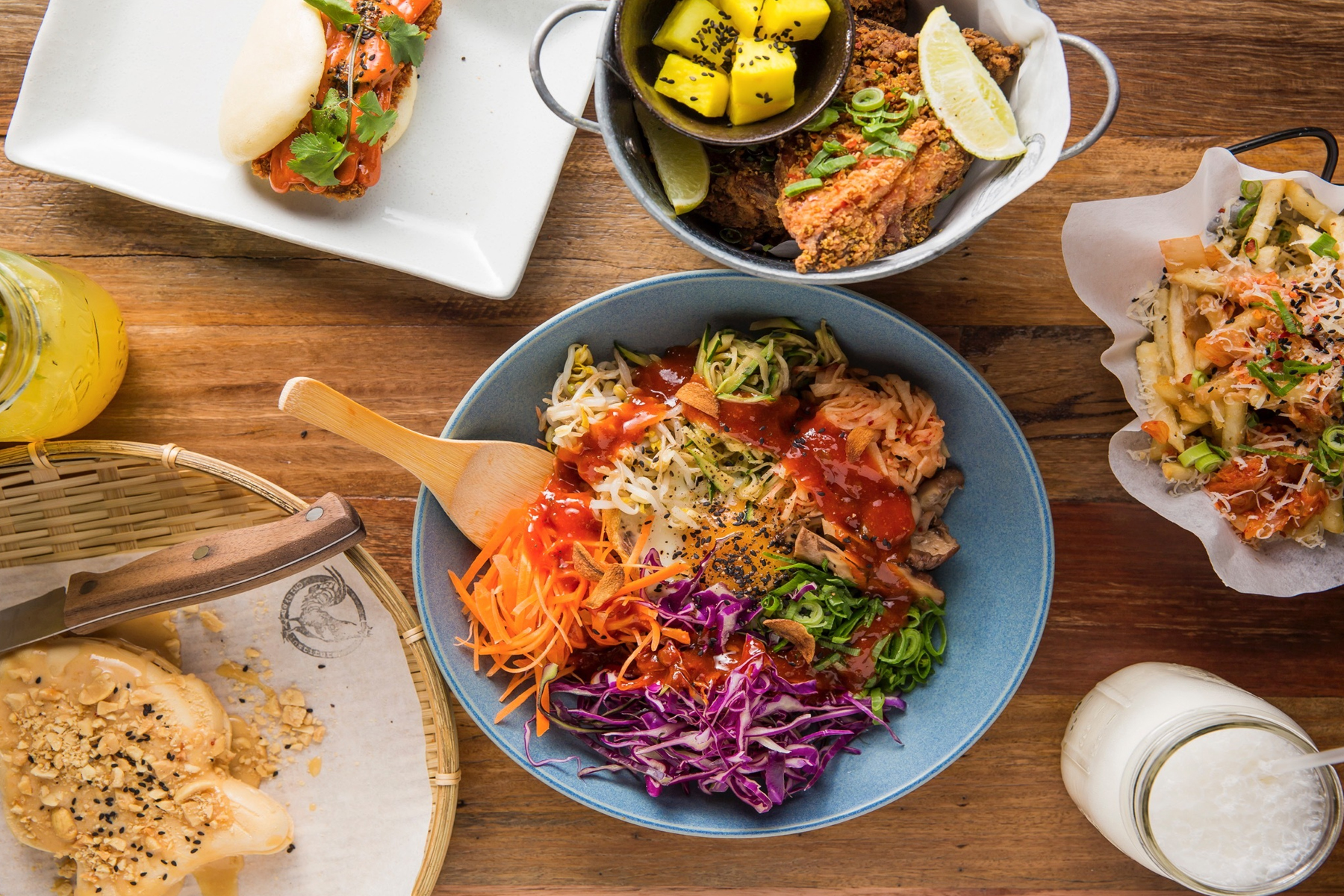 Australian lay claim to wonderful food creations, some more ingenious than others, yet our attachment to our Aussie food ‘classics’ suggests that it is the simpler things that take our fancy. Whether at a family Christmas feast at the height of a scorching Australian summer or barracking at a local footy match in the depths of winter, Australians enjoy foods that suit our laid-back lifestyle.

Legend has it that, inspired by the Russian ballerina Anna Pavlova during her 1926 and 1929 tours of Australia, Western Australian chef Herbert Sachse of Perth’s Hotel Esplanade created a desert recipe that was as light as the ballerina herself. With its wispy meringue base, smothered in a layer of freshly whipped cream and topped with fresh fruit and tangy passionfruit pulp, it’s no wonder it has stayed firmly cemented in modern Australia’s food culture. The origins of the ‘Pav’ are, however, disputed, and New Zealand has claimed that their cookbooks have older versions of the light, summer dessert. To this day, it remains one of the great bones of contention between us and our Kiwi cousins.

Australia’s love affair with the simple Chiko roll began back in 1951, when it made its NSW debut at the Wagga Wagga Agricultural Show. Frank McEnroe – a boilermaker from Bendigo, Vic. – invented the cabbage, carrot, onion and beef stuffed snack. He originally designed the Chiko roll as take-away food at football matches; the intent being to make a snack that could be held in one hand, the other hand would of course be occupied holding a cold beer. Belying its name, the Chiko Roll contains no chicken, and was inspired by the popular and much smaller Chinese spring roll, claimed by Chinese Australians as their own.

Take 5 – Budget Dinners – Chunky Beef, Bacon and Mushroom PieThe great Aussie meat pie, though a cultural icon, was not developed here, but it has long held pride of place in the affections of Australians both young and old. First records of the Aussie meat pie come from early colonial days, when they were sold by vendors from street-carts – most famously by the Flying Pieman whose athletic feats are the stuff of legend. Nowadays meat pies are ubiquitous, found in sports club canteens, service stations and gourmet bakeries. The meat and gravy filled, flaky pastry case has earned its place in Australian culture, and the ‘Official Great Aussie Pie Competition’ has been a national event since 1990.

Snacks – Splice Pine Lime FlavourIntroduced by Streets Ice Cream in the 1950s, Splices developed almost a cult following. The unconventional ice-cream, coated in a layer of fruit flavoured ice was an integral part of beach culture in summer, reaching peak popularity in the 1970-80s. Originally in ‘pine-lime’ flavour, a raspberry version was introduced later, and is still enjoyed by Aussies today. The catchphrase of Streets’ 1963 advertising campaign was: “You’ll jump for joy, it tastes so nice, it’s Streets’ sensational, raspberry Splice!”

15 Sweet Favouties – LamingtonsThere are many versions of the lamington’s origin, and it is still in dispute whether it was in Australia or New Zealand that sponge cake was first dipped in chocolate icing and rolled in desiccated coconut. One legend has it that Lord Lamington of Queensland was served the treat by his personal chef in 1900. Upon tasting this new delicacy, he requested it be named after him. Today the lamington can be found in every true-blue Australian bakery and features in almost every CWA (Country Women’s Association) recipe book, where it may well have first appeared – in times when waste was frowned upon – as a way of using up imperfect or stale sponge cake.

In 1922 businessman >Fred Walker commissioned a young chemist, Cyril Callister, to develop a spread from used brewer’s yeast – that would have otherwise been dumped – a naturally high source of vitamin B. The unlikely product was named ‘Vegemite’, a name drawn from a hat after being submitted in a national naming competition, and marketed by Walker as “delicious on sandwiches and toast, and improving the flavours of soups, stews and gravies”. Since then Australians have developed an almost jingoistic attachment to their breakfast and sandwich spread, and still sing along to ‘Happy Little Vegemites’, an advertising jingle first heard on the wireless in 1954. Since then many curious combinations have emerged: Vegemite-cheese sandwiches, Vegemite and avocado on toast, Vegemite pizza, and, in Tasmania, Vegemite scrolls.

Given Australia’s love of the outdoors, our superb weather and the rise of the portable barbecue perhaps it was inevitable that the ‘sausage sizzle’ Australia’s answer to the US ‘weiner roast’ and a mainstay of community fundraising – was born. And what better way to serve a sizzled snag but in a sausage sanger? As simple as a single slice of bread folded over a sauce-drenched sausage has also become a classic lunch-time meal for Australians and reflects our love of slang – sanger being a venerable term for sandwich. Authorities even tailored infrastructure – from the 1970s introducing public barbecues to many parks and reserves – so that they can be enjoyed pretty much anywhere.

Now the breakfast choice of Australians, Weet-Bix was first produced in Leichhardt, an inner-Sydney suburb, in the 1920s. Its creator, Bennison Osborne, wanted to bring a “budget-friendly health biscuit” to the Australian breakfast table as an alternative to Sanitarium’s Granose. Since then, the high-fibre breakfast biscuit has been served with lashings of milk – hot or cold – and hastily eaten before the dreaded sogginess sets-in. During WWII, Diggers on the South Pacific front were sent their Weet-Bix, a testament to their popularity and perhaps their durability. The company expanded to New Zealand early on, and Sir Edmund Hillary – who with ‘Tiger’ Tenzing Norgay was the first man to reach the summit of Mount Everest – ate them on his celebrated expedition. Ironically, early on Osborne sold his creation to Sanitarium, because it had proved so popular.

The creation of the Anzac biscuit was a joint venture with our New Zealand cousins across the Tasman. Developed during WWI by the womenfolk in soldiers’ families, the first Anzac biscuit was not as we know it today. Originally called a ‘soldier’s biscuit’ or ‘ANZAC tile’, it was very hard, designed to supplement the Diggers’ bread supply. After 1915, the modern Anzac biscuit developed from this primal food into a much-loved combination of oats, flour, coconut, butter, golden syrup and bi-carbonate of soda; a delicious combination of ingredients which could stand the long journey by ship and road to the trenches.

De rigueur for country town bakeries, the Neenish tart also has its origins shrouded in obscurity. This gelatine-set cream-filled delight, traditionally iced in pink/brown, brown/white or white/pink combinations, is said to have originated in 1913, in the Grong Grong, NSW, kitchen of one Mrs Ruby Neenish. Legend has it that she was preparing tarts for a kitchen tea, when she ran out of cocoa for the chocolate icing; her quick-witted inventiveness leading to the bi-coloured tart we know and love today. However, the first known recipe for Neenish tart was published in the Daily Telegraph of Launceston, Tas., in 1903.