When you book with an account, you will be able to track your payment status, track the confirmation and you can also rate the tour after you finished the tour.
Sign Up
476

Why Book With Us?

Do not hesitage to give us a call. We are an expert team and we are happy to talk to you.

Looking to spend your vacation in Southeast Asia? If a tour of Southeast Asia is on the cards, then this 9 nights Cambodia and Vietnam tour package is ideal for you. Explore the land of serenity and mystique, and explore all the major tourist attractions of Vietnam and Cambodia. 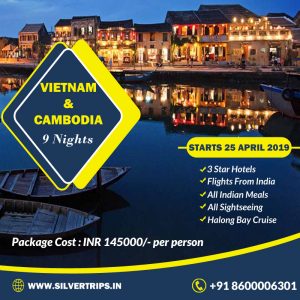 Arrive at Noi Bai International Airport, welcome by our guide and transfer to your hotel. The transfer distance is approximately 40 munites. Hanoi or “River-bound City” as its name literally means is Vietnam’s capital with a thousand-year-old history dating back to 1010. The city’s fascinating beauty which is characterized by unique cultural relics, ancient streets of antique houses, elegant French colonial buildings, tree-lined boulevards and romantic lakes has made it one of the most charming cities of Asia.

Accommodation: A hotel used in Hanoi.

Today, we will do the city tour beginning with the Ho Chi Minh Complex, containing the mausoleum of the nation’s founder, and his rural style residence with a house on stilts and the Presidential Palace. Also part of this complex is the unique One Pillar Pagoda, built in the 11th Century in dedication to Avalokiteshvara or Buddha of Compassion and reminiscent of a lotus blossom rising from a pond. The tour will continue on with a visit to the Temple of Literature, known as the first university of Vietnam built in 1070 by the Ly Dynasty to honor Confucius, sages and outstanding Vietnamese scholars.

After lunch, visit Hoan Kiem Lake and Ngoc Son Temple located on an islet in the lake. Hoan Kiem Lake is the center point of Hanoi and home to a rare endangered giant turtle species. Its name “Returned Sword” comes from a legend of a sacred sword being lent to an ancient Vietnamese King by a holy turtle from the lake and later returned to the turtle. Discover special Vietnamese traditional art of water puppetry as well as Vietnamese folklore through a compelling puppet show at Thang Long Theatre. Shop or walk at leisure in the Old Quarter of 36 ancient streets.

Accommodation: A hotel used in Hanoi

Morning, start a city tour beginning with Ho Chi Minh Complex which features the life of Ho Chi Minh, the nation’s founder. At the complex, visit Ho Chi Minh Mausoleum where the nation’s founder’s body is preserved (closed on Monday, Friday and through October – November), the colonial Presidential Palace, originally the French Governor Office and a fine example of French architecture in Hanoi, and the rural style Ho Chi Minh’s house on stilts where Ho Chi Minh lived and worked. Stop by one of Hanoi’s icons, the One Pillar Pagoda, built in the 11th Century in dedication to Avalokiteshvara or Buddha of Compassion and reminiscent of a lotus blossom rising from a pond. Continue to the Temple of Literature, known as the first university of Vietnam built in 1070 by the Ly Dynasty to honor Confucius, sages and outstanding Vietnamese scholars. Lunch at a Vietnamese restaurant

Afternoon, transfer to Ha Long Bay which is about 160 km or 3.5 hour drive away. Moving through the countryside on the way will bring you a clear perspective of a country’s whose 80% of population live on farming. Have a quick rest stop en route before reaching Ha Long City. Check in hotel then spend time at leisure.

Morning, breakfast at hotel between 6-7 AM, transfer to the dock for boarding a cruise boat to explore the legendary Ha Long Bay. Ha Long means Descending Dragon in Vietnamese as legend has it that a holly dragon landed down here from sky. The bay, famous as one of the world’s wonders and heritage sites whose formation dates back 500 million years, consists of around 2,000 karst islands and islets scattered over an area of 1,553 km2. The boat will stop at Dau Go Island for you to visit Thien Cung Cave (Heaven Palace) and Dau Go Cave (Wooden Stakes). Dau Go Cave in 13th Century was a depot to store pointed wooden stakes, which later were used by Vietnamese great military commander Tran Hung Dao to trap and puncture Mongolian naval boats in famous battles of Bach Dang. Continue cruising while fresh seafood lunch is served on board. Return to the dock, disembark and travel back to airport for flight to Ho Chi Minh by…

Arrive in Ho Chi Minh City, welcome by our guide and transfer hotel for check in

Ho Chi Minh City formerly named Saigon is the largest city and economic center of Vietnam always bustled with activities of modern life. It is where businesses converge and shoppers indulge themselves into unlimited choices. However the city also carries with it a rich historical legacy in contrast with its dazzling glamor.

Morning, take a half-day tour to the Cu Chi Tunnels, 75 km Northwest of downtown Ho Chi Minh City, which were once a major underground hideout and resistance base of Viet Cong forces during the two wars against the French and later on Americans. The tunnels, entirely hand-dug, formed a highly intricate network of interlinked multilevel passageways at times stretched as far as the Cambodian border and totaling over 120 km in length. Its complexity was beyond imagination containing meeting rooms, kitchens, wells, clinics, schools, depots, trenches and emergency exits all aimed for guerrilla warfare. The tunnels were deep and strong enough to withstand destructive bombings and self-contained enough to outlast prolonged sieges. Back to Ho Chi Minh City and spend time at leisure. Back to Ho Chi Minh City. Lunch at a local restaurant.

Afternoon, come on city tour with a visit to the Reunification Palace which was formerly the South Vietnam President’s residence and symbol of the Southern Administration’s reign until end of April 1975. Proceed to the War Remnants Museum, which features an extensive collection of exhibits including weaponry, photos and documentation on Vietnam’s wars with the French and Americans. Evening, enjoy water puppetry show at Dragon Theatre.

Today, you will be picked up and travel past miles of flat rice fields, along a bustling road to the Mekong Delta, the world’s largest delta and Vietnam’s largest rice bowl.

On arrival in My Tho City, board a motorboat and navigate through intricate canals while observing the local daily life up close as well as the landscape of waterways and lush islands. Land on Thoi Son Island where you can listen to Southern traditional music performed by native artists. Next, you will change to a paddle boat to cruise through the narrow canals and visit households with traditional occupations of home-based coconut candy and rice-wine making. Continue travel by motorized boat to another island to visit a bee farm and taste tea with fresh honey from the beehives and enjoy fresh fruits. Interact with local residents to understand about the river life. Their economy is based mostly on tourism, mangoes, bananas and citrus fruit. On the return to My Tho, stop to visit the Vinh Trang Pagoda, a prominent local Buddhist structure built in 1850 with a unique architectural mixture of Vietnamese, Roman, Chinese and Cambodian styles characterized by a highly ornate façade. You might enjoy a lovely lunch at a local Vietnamese restaurant before find the way back to Ho Chi Minh.

Free at leisure until transfer to airport for departure flight to Siem Reap. Upon arrival, you will be transferred to hotel. Free at leisure.

After a flavourful breakfast at hotel, you will start your sightseeing tour of Angkor area. We will spend a full day exploring the wondrous ancient ruins with the South Gate of Angkor Thom, which is famous for its series of colossal human faces carved in stone, the impressive Bayon Temple, the Royal Enclosure, Phimeanakas, the Elephant Terrace, the Terrace of the Leper King and the largest as well as the most complete temple of Angkor Wat. You will stroll around this massive edifice, seeing the many galleries with columns, libraries, pavilions, courtyards and ponds full of water reflecting the towering temple and the jungle covered temple of Ta Prohm is an incredible sight. There are enormous fig trees and gigantic creepers which embrace themselves in the stone foundations of the structure giving the impression of man’s creation being reclaimed by the powerful forces of nature. After this overwhelming tour, you will be transferred to hotel for a restful sleep.

After savouring a delicious breakfast at hotel, you will head to visit Kulen Mountain which was the Khmer Empire’s capital in the early 9th century and swim in the waterfall. Here we will visit countless ancient temples, the River of 1000 Lingas, a reclining Buddha and a cascading waterfall. One the way back, we will visit the intricately carved and well preserved temple of Banteay Srei. Along the way, we make a stopover at the Preah Dark village and visit the Banteay Samre Temple adorned with impressive relief depicting scenes of Vishnu as well as Krishna legends. After this you will return to hotel for a sound sleep at night.

Savour a healthy breakfast and complete the hotel check-out formalities after which you can visit the local markets and buy souvenirs for your loved ones. Later, proceed for departure and board your flight back home. Trip ends with a lifetime of memories. 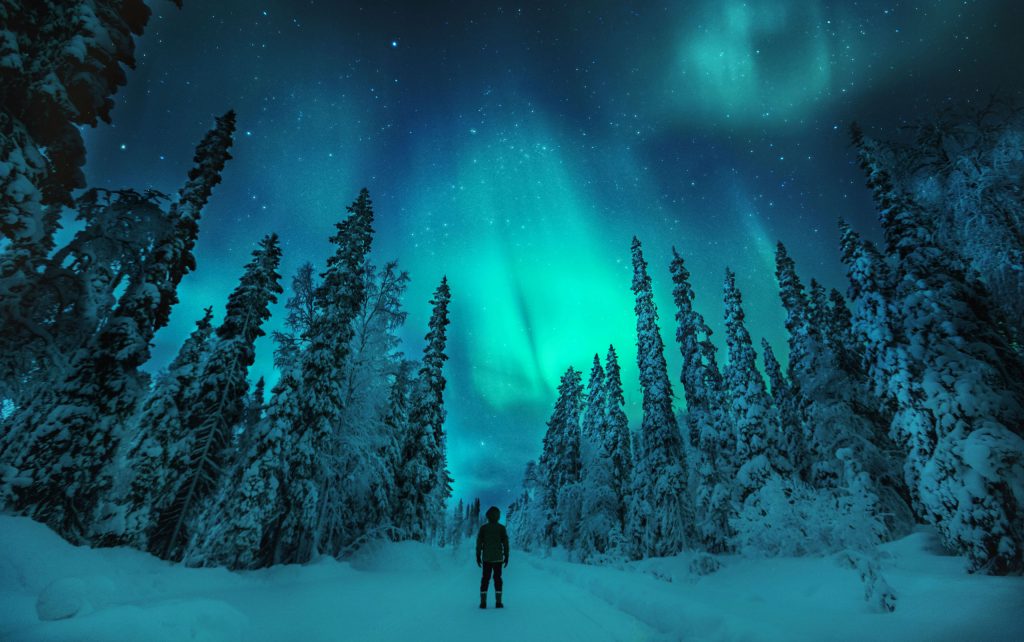