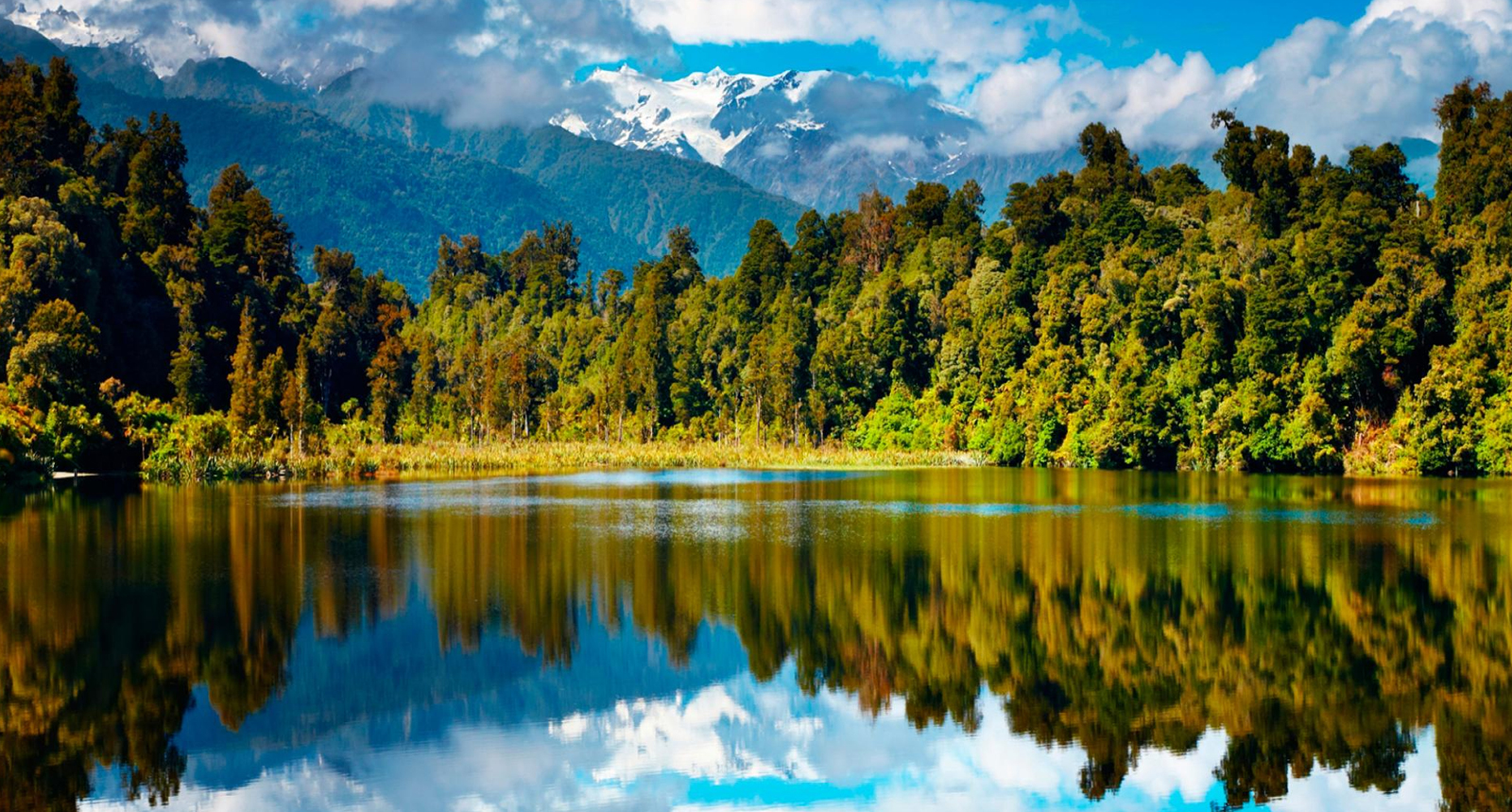 A visit to New Zealand will expose you to some of the most beautiful – and geographically diverse – landscapes out there. From rocky alpine terrains to stunningly pristine beaches, here are 15 Best Places to Visit in NZ you don’t want to miss. 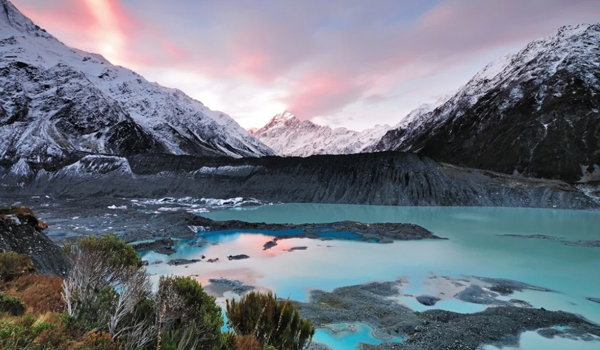 Hikers, mountaineers and avid nature lovers head into Aoraki/Mt Cook National Park to marvel at its exquisite mountain ranges, glaciers and remarkable rocky terrains. The national park is part of Te Wāhipounamu World Heritage area in the southwest corner of the South Island and is home to Aroaki/Mt Cook – New Zealand’s tallest mountain. 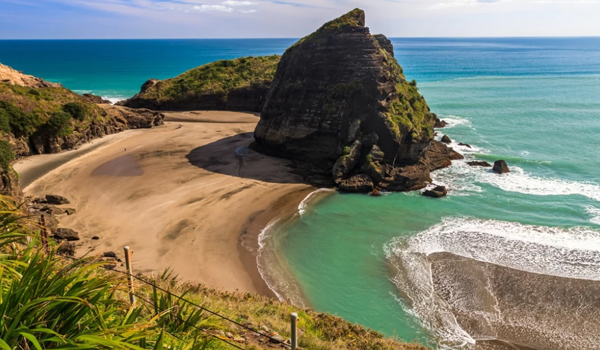 Popular among surfers, landscape photographers and holidaying Aucklanders not wanting to delve too far out of the city, Piha Beach is definitely one of those places that has something for everyone. Black sands and a rugged appearance are a strong part of this beach’s appeal. The Lion Rock, a volcanic monolith with a war memorial and unique Māori carvings, is a favourite photo spot for visiting shutterbugs. 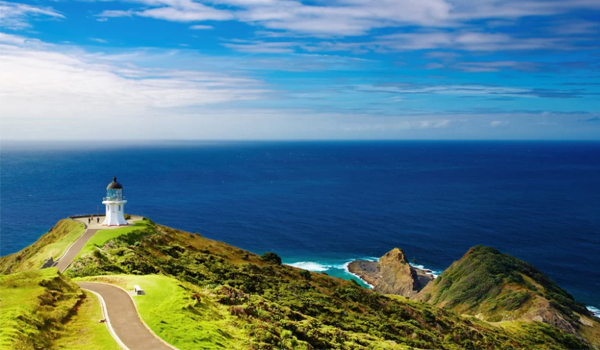 Cape Reinga is located right at the top of the North Island – though it’s not quite the northernmost point in New Zealand. Māori legend tells us this is the place where the spirits depart from the Earth and into the ancestral homeland of Hawaiki. The walk to Cape Reinga’s iconic lighthouse provides some spectacular views of the coastlines and its surrounding greenery. 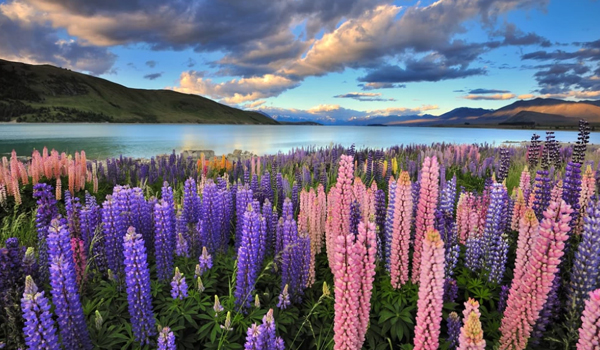 During the day, Lake Tekapo dazzles with its bright blue glacial waters. At night, the area becomes a stargazing haven: the township, its stunning lake and the nearby Mt St John Observatory are all part of the South Island’s International Dark Sky Reserve. During spring, you’ve got another picturesque bonus: the lupins that colour the roadside in a carpet of purple and pink hues. How beautiful Lake Tekapo- Best Places to Visit in NZ. 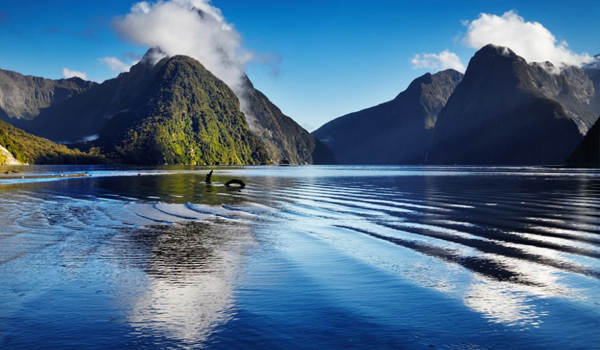 It’s fair to say that Milford Sound is the jewel of Fiordland National Park. The secluded fiord welcomes hundreds of thousands of visitors each year, many of whom come from Queenstown or Te Anau to spend a day cruising the inky waters and admiring the natural scenery. The more adventurous might explore the Milford Track – one of New Zealand’s most highly sought-after multi-day hiking routes. 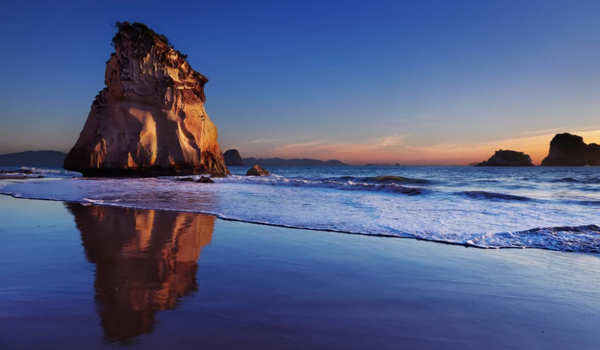 The Coromandel Peninsula is a summer holiday favourite among New Zealanders. A collection of picturesque coastal towns, campsites, surf spots and fishing locations are some of its assets. Beautiful gems such as Cathedral Cove and Hot Water Beach are additional bonuses. 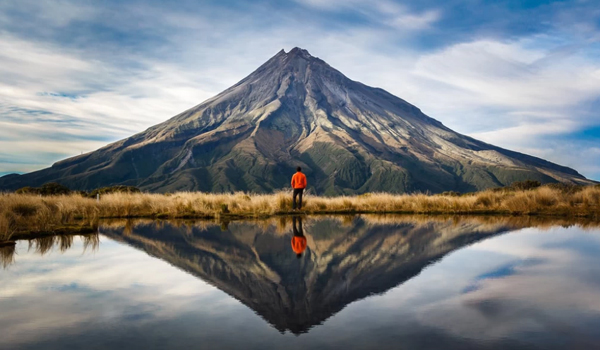 Also known as Mount Egmont, Mount Taranaki is a quiescent stratovolcano on the western coast of the North Island. Its symmetrical shape gives it a strong resemblance to Japan’s Mount Fuji – so much so, that Mt Taranaki served as the backdrop for the iconic mountain in the Tom Cruise film The Last Samurai. Hiking tracks around Egmont National Park provide access to this magnificent summit. 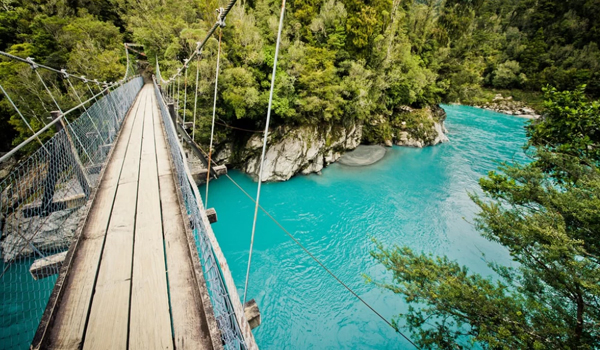 Located on the West Coast region of the South Island, the Hokitika Gorge is one of those amazing places that look as good as – if not better than – its pictures. A walking track 33 kilometres (20.5 miles) outside of the town of Hokitika will bring you up close and personal to the gorge’s shimmering turquoise waters and densely forested surrounds. As you reach the viewing platform, a stunning swing bridge comes into view: this is the ultimate spot for a photo opportunity. Surely you never miss this Best Places to Visit in NZ. 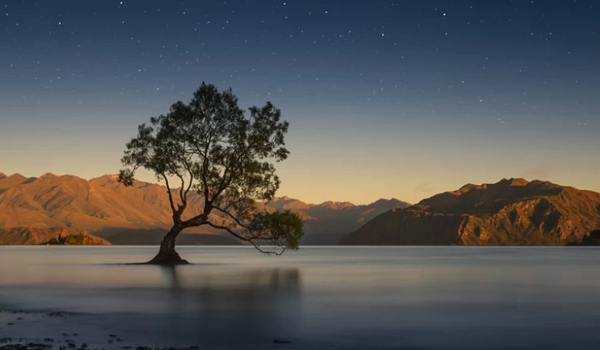 With its small-town friendliness and incredible lake and alpine features, Wanaka has become a much-loved getaway for those needing a breather from its dynamic cousin Queenstown. In winter, Wanaka is the ideal base for skiers as the town is right en route to some of the South Island’s premier resorts; summertime offers plenty of water-based activities for those wanting to admire the expansive lake that gives the town its name. 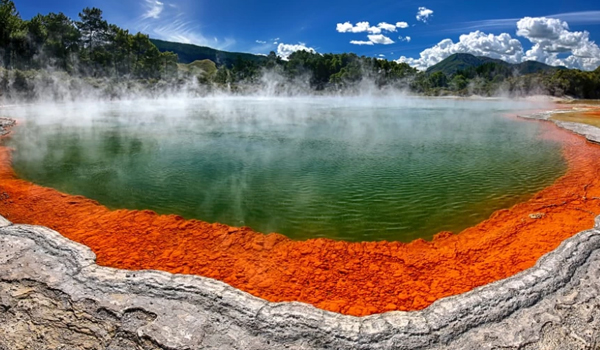 Wai-O-Tapu Geothermal Wonderland is located just outside of Rotorua – a place that, throughout history, has impressed visitors with its geysers and hot pools. The geothermal park is notable for its showcase of colourful springs, including the vibrant Champagne Pools and the fluorescent-green Devil’s Bath; as well as the spouting Lady Knox Geyser and the bubbling mud pools that aptly showcase the area’s remarkable volcanic activity. 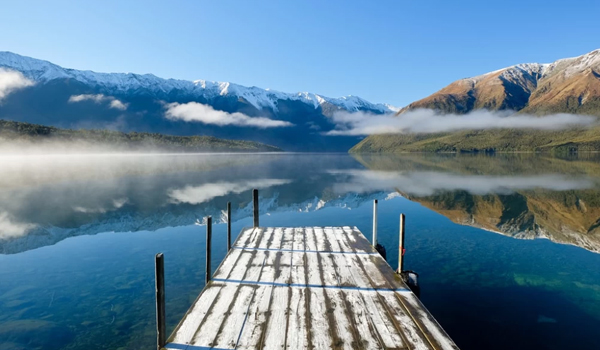 Set on the upper end of the South Island, Nelson Lakes National Park marks the beginning of the Southern Alps. At the heart of the park you’ll encounter two breathtaking alpine lakes surrounded by soaring forested valleys: Rotoiti and Rotoroa. The lakes and the surrounding parkland are highly desirable spots for camping, fishing, hiking and swimming. Don’t forget this Best Places to Visit in NZ. 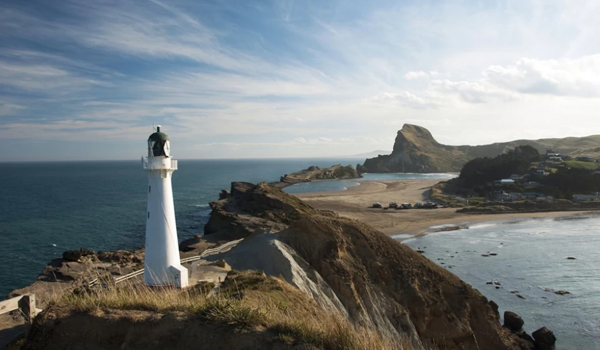 Castlepoint is a small seaside town on the Wairarapa coast, just north of the capital city Wellington. Its lighthouse is the tallest in New Zealand – a walk to this 23-metre-high (75.5-foot) beauty will expose you to some of the North Island’s most dramatic seaside views. A compelling collection of fossil shells are found amid the lighthouse route; if you’re lucky you might spot some native fur seals and birds hiding in full view. The sheltered lagoon at the base is another highlight to check out during your visit. 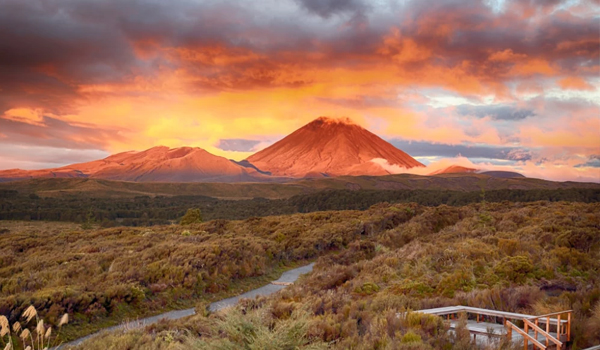 The North Island’s Tongariro National Park holds dual UNESCO World Heritage Status because of its Māori cultural associations and remarkable volcanic features. The park is home to three active volcanoes – Tongariro, Ngauruhoe and the ski slopes of Ruapehu – as well as the glacial Emerald Lakes (best viewed by hiking the Tongariro Alpine Crossing) and the boiling mud pools of the active Red Crater. 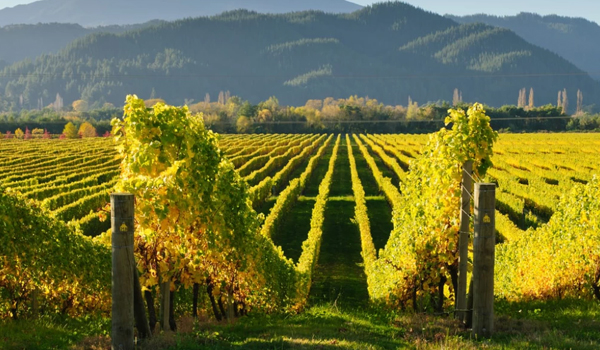 Many people make the inter-island detour from Wellington to Marlbourough to do some wine tasting. This beautiful stretch of the South Island is known for putting New Zealand’s viticulture on the world map – particularly because of its pioneering cultivation of Sauvignon Blanc varietals. Besides having an obvious gourmet flair, the area is an outdoors lover’s dream: if you like your hiking fix, a visit to Marlbourgh Sounds and Queen Charlotte Sound will be right up your alley. Visit New Zeland with Silvertrips & get mesmerizing experience. 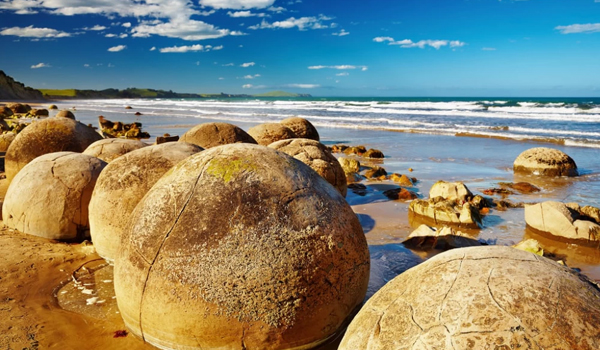 When one thinks of Moeraki, the first thing that comes to mind is the compelling spherical boulders scattered around Koekohe Beach. These intriguing rock features on the Otago coast aren’t just notable for their massive size; they’re also of great interest to geologists who study their phenomenal concretions – so much so, the area is part of a protected scientific reserve. The boulders are often spread in clusters and have been carved out of mudstone erosion and the beach’s turbulent waves. It’s one of the Best Places to Visit in NZ. 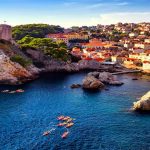